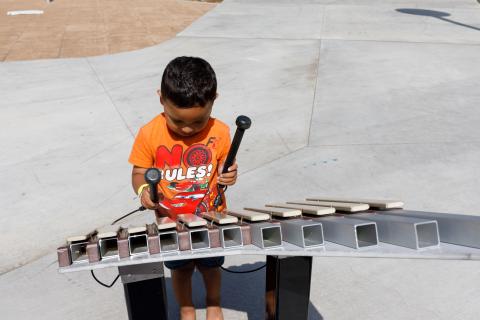 The root causes of inequities impact families and children across our county in lots of ways, every day. The work we do at Early Learning Multnomah and the programs we invest in have to reflect the reality of that diversity of experience and opportunity. As Oregon prepares to make new investments in early learning, we wanted to take a moment to celebrate the significant work that has happened since the beginning of this year.

Early Learning Multnomah, with the support of its fiscal sponsor United Way of the Columbia‐Willamette, has helped to create and invest in programs, materials, and gatherings that get kids ready for kindergarten, support stable families and align services for families. From STEM Kits to the Preschool Promise program the work and investments are making an impact worth recognizing and celebrating (while acknowledging there is so much work to do!)

Here are some of our highlights from 2019 thus far:

8 of the 9 Preschool Promise programs supported by Early Learning Multnomah have now received 4 and 5‐star Spark ratings. This rating signifies their commitment the providing high quality learning environments for kids and families. Congrats to these amazing programs bringing preschool to more children in our community!

The work of connecting families of young children to school districts is so important to make sure families feel engaged and empowered as their children transition to kindergarten and beyond. There is some very exciting work happening in schools around Multnomah County, including:

* All six of the largest school districts in Multnomah County are participating in Kindergarten Teacher Home Visits. Teachers across the county are stepping out of their comfort zone and building relationships with students and their families in their homes.

* A Kindergarten Teacher said this about Amanda Anderson, P‐3 Coordinator with IRCO at Powell Butte Elementary: “She is such an asset to our students, families, and staff. She is able to make connections with families by making them feel important, heard, and their children cared for.”

* Sacramento Elementary has a family leadership team titled “Bridging Communities.” This team, which involves parents from different cultures, languages and ethnic backgrounds, is supported by Utica Abdullah, P‐3 Coordinator with IRCO. Over the last two years, Bridging Communities have organized, planned, and led numerous community events. Due to their strong voices and visibility, the Principal invited parents from this leadership team to be part of
the Site Council where they can be involved in making decisions that impact the entire school community.

Preschool for All Taskforce

We are constantly in awe of our Parent Accountability Council and their efforts over the last five years to build parent leadership. One big highlight from this year was the PAC serving as an advisory committee to the Preschool for All Taskforce. The PAC’s vision for Preschool is going to shape the future of opportunities across the county.

4,000 STEM Kits were distributed to partner organizations to give to families in their communities this year. In addition to being available in six languages, the kits included a culturally specific “Did you know?” section at the end of each category of the booklet. Each “Did you know?” highlights a person from the community who has been successful in the STEM field—such as Mae Jemison, the first African‐American woman to go to space, or Ynés Mexía, a Mexican‐American botanist. This is one way of ensuring that all kids see themselves represented in the world of STEM from an early age.

In April, the Early Childhood Coalition pulled together a cross‐sector group to go down to Salem to advocate for a full range of investments in early childhood. Early Learning Multnomah participated in this coalition and got to see first‐hand the power of community voice and authentic partnership. The Coalition’s impact on the historic investment Oregon made in early learning this legislative session will be felt across the state.

The Community Education Worker program has served 116 participants since January!

In the beginning of the year, the Community Changemakers in Early Childhood Education (CCECE) Training was launched. The training was designed to create a pathway for parents who wanted to enter into the workforce as Community Education Workers, parent educators, home visitors or early childhood classroom staff. 18 participants completed the entire session.

The first Parent Leadership Training in took place in July with a full day session of Popular Education. There were ten parents in attendance and interpretation happened simultaneously into Somali, Swahili, Spanish, and Burmese. The workshop was tremendously successful, and parents reported feeling a sense of connection to the parents from the other cultural group after this session. This increased sense of connection cross‐culturally was a strong accomplishment for only one day of training. Parents who came with a great deal of trepidation and fear of being in any sort of class setting left expressing that they felt that they heard the truth in the activities conducted throughout the day and a desire to work with parents from other communities.

Oregon Governor Kate Brown signed House Bill 3427, the Student Success Act, into law on May 20, 2019. This law aims to correct three decades of underinvestment in our schools and our children and includes sweeping provisions for new and improved services for children and families.

As mentioned above, Student Success Act will bring an expansion of state‐funded preschools and other early learning service to counties across the state. Early Care and Education Sector Planning for the new investments began this month. A Regional Stewardship Committee (RSC) has been convened by Early Learning Multnomah. The RSC includes thirty one members of the Preschool For All Technical Advisory Committee and the Parent Accountability Council supported by additional community conversations.

The Early Learning Community Meeting on October 15th provided an initial opportunity to dig deeper into the Student Success Act and the work of the Preschool For All Taskforce. The timeline for phase 1 of the Early Care and Education Sector Plan is tight, with deliverables due to the Early Learning Division by December 13. These deliverables include an analysis of priority populations for preschool expansion, a description of the current service array and a depiction of related expansion efforts underway in the county. Fortunately for Multnomah County, these deliverables connect smoothly with the recommendations from the Preschool For All Taskforce, which were based on hundreds of hours of data analysis, community engagement and provider
and parent input over the past year.

Student Success Act funds designated for early care and education will be awarded through a state procurement process to be released this winter. By January we hope to have information about the size and type of investments designated for Multnomah County. Things are moving fast and if you would like more detailed information about the Early Care and Education Sector Plan, please contact Molly Day. We will also post updates and opportunities for connection here on our websites and through our ELM newsletter.