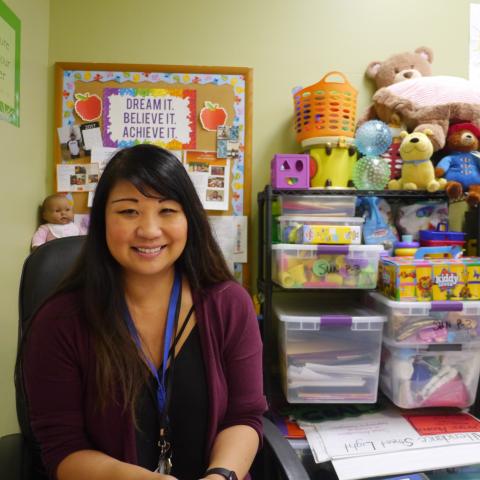 ELM has invested over $2 million in the P-3 Schools model since 2015—and now school leaders and community partners are finding creative ways to bring P-3 Coordinators like Mani Xaybanha to new communities.

When Mani Xaybanha first started as a full-time family engagement specialist—or Prenatal-3rd Grade (P-3) Coordinator—at Sacramento Elementary School in Parkrose School District, she sensed that something vital was missing at the school.

While children of color made up about 60% of the school population at Sacramento, most parents of color weren’t engaging in school activities and events. They weren’t volunteering. They weren’t serving on the PTO. There were too many barriers standing in the way.

“For many of them, the American school system was new and unfamiliar. There’s intimidation. There are language barriers. It’s not their home country. They see others who are engaged and taking care of everything. I wanted them to know: ‘So can you!’”

Mani is one of nine P-3 Coordinators hired across the district with ELM funding and supported by five SUN Lead Agencies. Their goal? To connect families—particularly families of color, immigrants and refugees—to neighborhood schools and foster parent leadership through the early grades.

ELM has invested over $2 million in the P-3 Schools model since 2015. That’s because research shows when school leaders engage and connect with parents early and often in culturally appropriate ways, kids do better in school.

P-3 Coordinators plan activities to help parents feel connected, comfortable and confident as members of their school community—all so their kids know they belong, too. These activities include school-based Play and Learn groups for parents and their babies, toddlers or preschoolers, Parent Cafes where parents can discuss issues like bullying and social aggression, and family-friendly events throughout the year.

Because their jobs are focused on family engagement, P-3 Coordinators have more time and resources to listen to families in their school community and build from best practices to create a tailored plan that meets family needs. They also work with school principals, teachers, staff, and Parent Teacher Organizations to ensure that marginalized families are included and have a voice in their school.

Since Mani started at Sacramento Elementary, parent leadership among parents of color has grown exponentially. That’s due, in part, to the family leadership team she created last school year with former Principal Katie Barrett and SUN Site Manager Jenna Sjulin. Called “Bridging Communities,” the group is made up of about a dozen parents from African American, African, Asian American, Latino, Slavic and Syrian communities. Each member was personally invited to participate by the principal and given a special role on the team. Bridging Communities is a safe space where their diverse voices can directly influence school culture. Just as important, the group gives the parent leaders an opportunity to further develop their leadership skills and share those skills with others in their communities.

“They act as liaisons for other families because they know what’s going on in the school,” said Mani. “They feel like they are leaders. They have a voice and their voices are more prominent now.”

Last school year, parent leaders created the framework for the Bridging Communities group, organized an anti-bullying forum for Sacramento families, and planned an end-of-year school picnic with record attendance. This school year, they are planning a health forum, informational curriculum nights, and “global cooking” classes that will culminate with a printed cookbook of recipes representing the diverse cultures at the school.

“It takes a reach of a hand,” said Mani. “They needed a liaison, a sense of safety and comfort that they weren’t getting before. They needed someone who was passionate about it who would take initiative of inviting people to participate.”

"I feel like that’s my job,” Mani said. “These parents were engaged, they participated, they had a voice, and now are leaders. They are part of my team now.”

Nine schools across six school districts are now implementing the P-3 model with funding from ELM and support from SUN Lead Agencies. Now, after seeing the success at the nine P-3 schools, others are trying to figure out funding to leverage the model to bring the coordinators to their schools and communities.

In Portland, Home Forward, PPS and the Kelley Foundation are working together to fund a part-time P-3 Coordinator at Cesar Chavez K-8 in North Portland, where 77% of students are students of color, immigrants or refugees. The hope is to expand the P-3 Coordinator’s hours to full-time once the family engagement work gains traction.

In Reynolds School District, Metropolitan Family Service is expanding the role of their P-3 Coordinator at Salish Ponds Elementary to serve families at the nearby Fairview Elementary—where 70% and 60% of students respectively are students of color, immigrants or refugees. New 21st Century funding will help the schools hire a P-3 associate to assist with on-the-ground engagement, while an experienced P-3 Coordinator guides strategy and implementation.

This kind of creative funding to expand and sustain the P-3 model shows that school and community leaders believe it’s working.

As the P-3 model inspires deeper, more thoughtful family engagement across Multnomah County, ELM and its partners are taking a closer look at how the model works with other promising practices in early learning.

Because P-3 is already connected to SUN Lead Agencies, P-3 efforts coordinate seamlessly with Early Kindergarten Transition programs to give kindergartners and their families a head start the summer before kindergarten. ELM and community leaders are also thinking together about how to connect Preschool Promise with the work of P-3 Coordinators to share resources for tools and training and connect families to schools before kindergarten.

ELM is committed to P-3 because getting family involvement right from the very start of school lays the foundation for strong schools that reflect the real needs of the kids and families they serve.