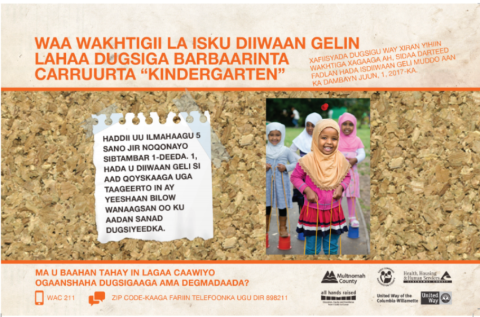 Learn what’s new about this year’s campaign to get kids signed up for kindergarten by June — new language, new culturally specific materials, and an expanded campaign across Multnomah, Washington and Clackamas counties.

Ready for Kindergarten is an outreach campaign to encourage and support parents to register their children for kindergarten before school offices close for the summer. A big part of this work is connecting the people and organizations who work with families and their young children so we can get the message out far and wide. With the support of Health Share and FamilyCare, the campaign is now officially a tri-county effort, with Clackamas Early Learning Hub, Washington County Early Learning Hub, and the North Clackamas School District as key partners in the work.

To inform this year’s campaign, we engaged families across the tri-county area to gather feedback on the language and images used in last year’s campaign. The input we received was not what we were expecting. Parents told us about the fear and anxiety they felt when they heard the word “register” due to recent threats and violence toward immigrant and refugee communities—particularly the executive order banning immigrants from several Muslim-majority countries. They also told us that they did not see their communities reflected in the images we were using in language-specific flyers.

Be part of this effort! Print the following materials and talk to staff, co-workers, parents, and neighbors about the importance of signing up by June!

Special thanks to the families who participated and gave us feedback, and to all our campaign partners across Multnomah, Washington and Clackamas counties. We’re looking forward to a successful campaign this year!